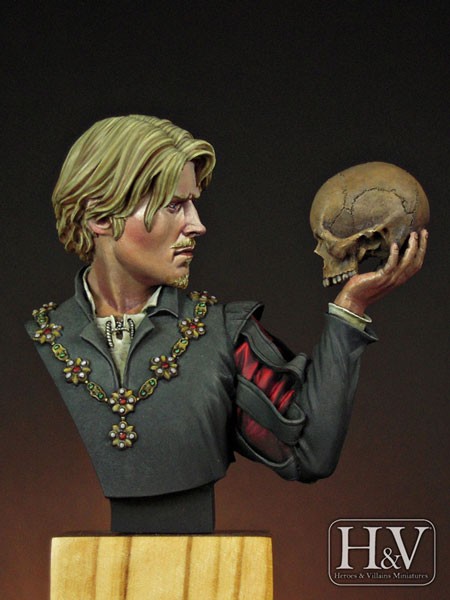 Sculpture:Juan Díaz
Material:Resin
Number of parts of the kit: 5
Scale:1/12

The Tragedy of Hamlet, Prince of Denmark, written by the immortal William Shakespeare is, without any doubt, one of the most famous works in universal literature. It is the work that gained more prestige for its author, even when he was still alive, and among the ones more worldwide played in theater.

Some sources consider that the author got inspiration from Prince Amled, a character from a XII century Danish saga compiled by the Nordic historian Saxo Grammaticus. It's also believed that Prince Hamlet's role was specially created to be portrayed by Sir Richard Burbage, the most popular actor of the Elizabethan stage.

Set in Denmark, it tells the events after the murder of the King, Prince Hamlet's father. The starting point of the plot is the apparition of the King's ghost to Hamlet, who reveals that he has been murdered by his uncle Claudius to occupy the King's place on the throne. The ghost asks his son to avenge that crime. Among the themes that shape the axis of the play we can find madness, both real or pretended, pain turned into anger, betrayal that leads to vengeance, incest or corruption.
For our version, we wanted to show the vitality and passion of this tormented character in one of the many unforgettable moments of the story, the monologue declaimed while holding the exhumed skull of the jester Yorick. The bust attire answers more to a theatrical looking aesthetic than to any other particular style of dress.

7 reviews for Hamlet, Prince of Denmark