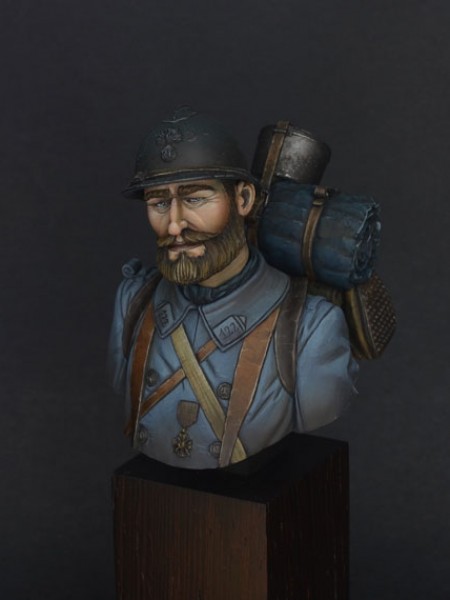 In honor of the Centenary of the First World War …

The improvisations of autumm 1914, the terrible winter of 1914-15, and the partial and piecemeal of new horizon blue uniform in spring 1915 left the French infantry with a very motley appearance. During the second half of 1915 a degree of standardisation was achieved, from that point on the front line infantryman, dressed from head to foot in the new uniform, began to resemble the theoretical image foreseen in the regulations of 9 december 1914. One new and essential element was now added: the steel helmet. The French were the first to receive a general issue of helmets, which it was hoped would reduce the very high proportion of head wounds from bullets and shrapnel; it was supplied to front line troops from September 1915. The definitive outline of the ‘Poilu’ had now been achieved: the soldier who would be tested by fire and steel in the holocaust of Verdum.